Here she is again, reading. 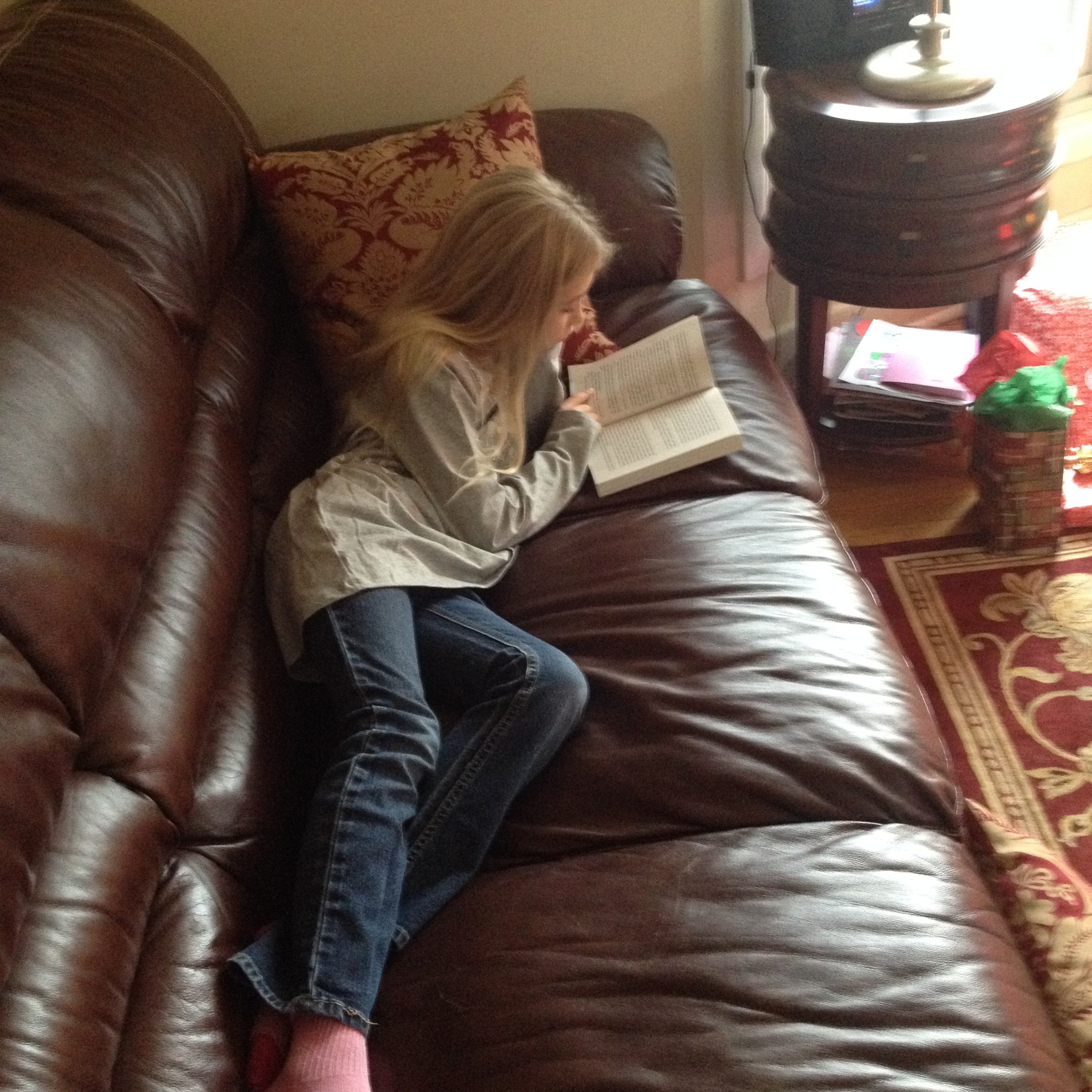 When Jane is reading, she is in her own world.

I hear that you want to be a writer.  I think this is an excellent idea that you should pursue with enthusiasm.  May I offer a few observations.

Don’t wait.  I remember wanting to be a writer when I was your age, but gave it up because when I compared my writing to what other people admired, mine wasn’t the same.  I made the mistake of thinking that this was because mine wasn’t any good, and even worse mistake, of thinking that I would never improve.  So now,  here I am at 75, with more books in my head than I am likely to have time to write.  So start now, and don’t stop.

Believe in your own stories and poems enough to make them as good as you possibly can.  Go over and over them until you see where you took a short cut or fudged something or tried to sound like someone else.  Read what you write out loud and listen for the sounds, the rhythms and tunes in your writing.  You’ll soon hear the wrong notes and be able to fix them.

Write your own stories: the ones that you dream up in your own head.  Of course what you write will be influenced by what you have read.  Just make sure that you’re not doing imitations of someone else’s writing.

You have to learn the craft of writing. You know, writing complete sentences, putting capital letters in the right places, punctuation, and how to put it all down on paper so that it follows the conventions that you don’t notice while you’re reading someone else’s stories — things like where the quotation marks go, when to start a new line or paragraph.  Spelling, too.  These are the dumb but essential parts that you need to have under control.  Fortunately, they are also fixable with the help of someone who can go through, make the necessary corrections and help you avoid mistakes in the future.  Everyone needs someone to do this kind of proof reading.  All my books have been gone over by people who are good at what they do.  They didn’t change anything that I wanted to write, they just made sure that it was properly written.  They noticed things like that I’d used the same word, a perfectly good word, but I’d repeated it only half a page later, or that a character’s eyes were green in chapter 1 but blue in chapter 4.

There’s another kind of editor, who should really be called a story doctor.  These rare and wonderful people are hard to find.  They read what you have written with great care and then ask useful questions that the two of you can talk over until you are sure that you have made your story work.  Story doctors ask questions such as, “Are you sure you want to tell what she’s thinking?  Wouldn’t it be better to tell what she does or says next and let the reader work it out?” They say things such as, “This is a really good page and a half, but might it not be better earlier — or later — or even not at all — because right now, it’s getting in the way of what happens next.”  And then you talk about it together, and then you (not he or she) decide what to do about it.

There are a great many people out there who will offer to teach you how to write.  Resist them.  The ones who ask for money are easy: you just tell them you can’t afford their services, and they go away. There are others who want to talk about your writing and why it’s not the way they would like it to be.  Often these folk are would-be writers themselves who would rather talk than write, especially if what they say to you makes them feel big and you feel small.  The internet is awash with chat groups about writing where mean girls lurk, just waiting to undermine your confidence.

Personally, I don’t like writers’ groups, but I have writer friends — good writers — who do.  I think that their groups are made up of people who they have chosen with great care, as distinct from just joining a pre-existing writers’ group.

And there are good friends, teachers you respect, relatives in the business of writing who can turn out to be the most irritating, useless, frustrating and time-and-energy-wasting people imaginable.  They just don’t get it — “it” being what you’re doing.  They say things such as, “Your character Joe.  I don’t think he’s Italian, I think he’s Jewish.”  WHAT???  How do you know?  Joe is MY character, and if I say he’s Italian, he’s Italian.  Or, “Your character Marion is pretty and has a pixie face and brown hair.  I don’t think pixie faces are pretty, and I hate brown hair.”  WHAT??? That’s YOUR problem, not mine.  I know what Marion looks like because that’s the way she is in my story.

There also are people who want you to write their book for them because they have “great ideas but not enough time.”  Run away from such people as fast as you can.

Writing is like reading, only more so.  It’s a place you can go where you dream your own stories, get into your characters’ heads, fear for them, suffer with them, laugh at them sometimes, follow them into difficulties and figure out ways to get them back out.  When it’s going well, it’s such fun!  Mark you, there are times when you can’t quite seem to get it right, when what you’ve just written seems dull and boring, even to you.

I find that when this happens I need to look and listen to my characters, to stand beside Mairi on the deck of the great ship Cygnus, wondering what her mother and father are planning in the cabin one deck below her feet.  If I can see her, hear the waves, the wind in the rigging, the afternoon sun slanting shadows across the ship, maybe …    YES!  Right!  Here’s Cam come up the companionway to call her down to hear what Astreya and Lindey have decided.    All that stuff I’ve been writing and re-writing for the last couple of days about how she’s feeling — throw it away!  Let’s get down to the cabin and find out what happens next!

I’m running on and on.  So let me go back to the beginning.  Be a writer.  You are not likely to get rich, unless you’re both good AND lucky, but you will find that there’s nothing more satisfying than to write your own stories.  And there’s nothing like the glow you feel when someone tells you that he or she loves what you’ve written.

Inside was this card.  (We both love dogs.)

Inside the card was this letter.

I replied.  (Katherine chose the card.)

I hope this story continues….