An exchange on Facebook in 2013 between Shirley Mackenzie, artist and illustrator and Seymour Hamilton, author, with comments by members of All Things Nautical

Shirley Mackenzie: Seymour, may I present you with a challenge? What scene from Treasure Island goes unrecognized as significant to the theme and SHOULD be illustrated?

Seymour Hamilton: Well now, this causes me furiously to cogitate. The problem is that I first read Treasure Island in an edition with illustrations done in the manner of steel engravings in newspapers of the early 20th Century. I vividly recall a picture Hawkins in the apple barrel and another of him firing his pistol into Israel Hands’ face, and I seem to recall the “good guys” – Smollet, Livesey and Hawkins — examining the map on a tavern table. There was also a picture of Long John Silver with his parrot on his shoulder, and another of him at the Stockade, and finally one of him flinging his crutch at the honest sailor, Tom. All these incidents feature importantly in the 1950 film that starred Robert Newton, whose “Aaargh!” noise became the sine qua non of talking like a pirate. All this suggests that the illustrations in my copy were inspirations for the Disney film. Certainly, the images from the book and the film blur in my mind. The central themes of Hawkins growing up and the moral ambiguity of Long John Silver do not lend themselves to illustration, though they are the key moments for the actors in the various film versions; whereas the moments of action are obvious subjects for images. I made use of Wikipedia to sort out the differences between the book and the 1950 movie, which was where the last image I could think of came from — Silver rowing off into the distance, which occurs only in the film. So after all this, I’m not much help. If I were thinking of a ‘cover shot’ for the whole book, I think I’d try for the ‘land ho!’ moment, with the point of view on the foredeck, the bowsprit pointing towards the bay where the Hispaniola will anchor, the jungle coming down to the bright sand, and receding into the distance up a mountain with a rocky peak that rises above the forest. That’s the best I can do.

A few seconds later, as I re-read what I wrote, I’m not sure if the Treasure Island in my mind isn’t in Mauritius in 1946 – 8, when I was 5 – 7. Certainly, that’s where I got the brightness of the sand, so much more eyestrainingly intense than any image on paper or film. Rambling on, now I remember burying a treasure of a few Mauritian coins, a scroll and a broken penknife in a biscuit box under a tropical pine tree on the edge of that same achingly white beach.

Shirley: WOW – o.k. – you really thought this out thoroughly. How about a quotation from the book that you would like to see as a visual? I have been struggling to find that one very simple, yet corner-turning moment that tells the reader a lot with a little.

Seymour:  If only I knew how to get fifteen men on a dead man’s chest without the chest being 15 feet long, I’d go for the song.   “Them that die’ll be the lucky ones,” appeals as well: Silver at the stockade. Not crucial, but fun, would be Ben Gunn with the one word underneath, “cheese”. The best and creepiest passage in the entire book, however, is Blind Pew tapping his way to the Inn. Read it over, aloud, and see what it does to you.

At this point, Seymour posted in the Facebook group ALL THINGS NAUTICAL for more Treasure Island favourite moments, with this invitation.

I’ve been in an exchange on my Facebook page with Shirley Mackenzie, artist and illustrator about Treasure Island by Robert Louis Stevenson to which you are invited to contribute. She’s searching for quotes or moments in the story about which she may create images. This brings me naturally to pirates, and the following poem by John Masefield, “The Ballad of John Silver.”

We were schooner-rigged and rakish, with a long and lissome hull,
And we flew the pretty colours of the cross-bones and the skull;
We’d a big black Jolly Roger flapping grimly at the fore,
And we sailed the Spanish Water in the happy days of yore.

Read the whole poem using this link:  A Ballad of John Silver by John Masefield allpoetry.com

Steven Maffeo: a member of All Things Nautical .  My favorite is from when Jim Hawkins is captured by the pirates after they’ve taken over the hut on top of the hill. LJ Silver asks him to join the pirate gang, and Jim replies before he makes such a decision, he needs more information, to determine “what’s what.” One of the bystanding pirates then says, “Wot’s wot? Ah, he’d be a lucky one as knowed that!”

Shirley: I just rented the movie and repurchased the book – time to dive back in. Wish me luck.  [Later} Wow- I cannot believe that I read this book at 10/11. It is so thick with characters and jargon. What did I see in it back then??? I loved the illustrations, maybe that was part of it. I have an image already, well I actually have two images, but only one can take to paper. Which will it be?

Shirley:  This story is thick with description – but where does it lead? What is Mr. Stevenson saying about himself? What would he like us to believe? I caught a couple of great scenes that do not have anything to do with all the dramas this book unfolds. They creep in and out without us being aware, but they are very important.

Seymour:  When we read Stevenson, we are time-traveling: not just into the bygone age of pirates, but also into Stevenson’s own age, which is increasingly remote from us. A novelist in his time had to paint pictures, describe action, create characters, tell stories for an audience that did not have a pre-existing stock of mental pictures, action sequences and stock characters drawn from film, all of which today’s novelists can assume. His advantage was a blank slate: today’s writers practice their art in the context of Central Casting characters, back lot scenery, computer generated imagery, choreographed action — all of which are present in the memories of the readers. (Which accounts for the sameness of many novels that are not uniquely and authentically imagined, but instead merely rearrange other people’s material.)

No wonder that readers of “critically acclaimed serious novels” disregard or under-value story-telling as “genre writing”. Also no wonder that so many people return to Jane Austen, Charles Dickens, Stevenson, Kipling and those pre-film, pre-tv, pre-internet writers whose works have stood the test of time. The investment of learning to read longer, unfashionable sentences, and to voyage outside the narrow limits of a cut-to-the-chase plot, is to discover the unique vision of men and women who wrote out of their experience, as opposed second hand, mediated experience of film/tv/internet.

Shirley:  YES. He is remote to me for his age and experience, but he is also very close in how he paints, why he paints, and what he wants me to believe. 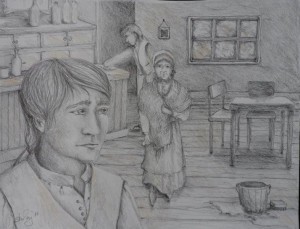 Shirley: Seymour – with this illustration, I seemed to have taken the whole mystique of boyhood adventure and lust for manhood out, then emphasized this bit paragraph of grief the main character expresses, and quickly moves away from. I felt it important to show this. Your thoughts??

Seymour:  If you were playing the part of Jack Hawkins, the action and adventure parts are easy — provided you are healthy and strong. The acting challenge lies in moments such as the one you have chosen, Shirley. They are at the emotional heart of the growing up process. These are the moments that make him a man, not the running, climbing and shooting, because they are at the compassionate heart of the story that RL Stevenson wrote, and why it still lives.

Shirley:  I agree whole heartedly. The action and descriptions propel the reader through scenes, and I am sure, that for the young male reader, it is a journey seen with envy and admiration. I am looking for the humanity in it, so these few scenes of emotion and growth, tell me a whole lot more about the writer. I liked that I had to search for it though.

One thought on “In Search of Treasure Island”