If you are in a hurry to get on with Astreya’s story, you can skip the Prologue and go to Chapter 1.  But if you do jump ahead, you’ll find yourself wondering where Astreya came from, and why he was not like everyone else. 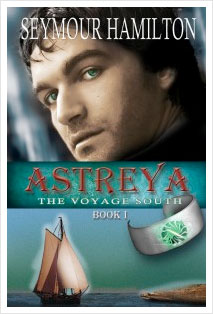 Ancient, round-shouldered mountains met the sea only a little south of where winter held the ocean ice-clad the whole year long.  Along the coastline, where harbors were few and hard to find, jagged rocks combed the breakers, grinding at shards of wood that might once have been ships.

A double handful of small, blunt-bowed fishing boats worked their way across the wind towards a gap in the cliffs that only they knew was there. As each boat rose to the crest of a wave, the men aboard sometimes caught a glimpse of their companions’ hulls, but more often they saw only dark sails, wind-bent on the same course. As they drew closer to land, the deep throated roar of breakers on the cliffs drowned the skippers’ shouts when they turned downwind to thread a needle’s eye of broken water between black headlands silhouetted against the evening sky. For a tense moment, each boat hung on the wave that its skipper had chosen to surf through the narrow gap; then one by one, they rode the breakers between the headlands, and were suddenly out of both wind and waves and only needed to avoid a tidal whirlpool before they were into protected water. Ahead of them was a bay the shape of a man’s hand, with four narrow fjords shaped like splayed fingers probing the forested mountainsides that fell steeply into the dark water below. The boats turned south into the fifth and broadest of the fjords where the mountains drew back, leaving a somewhat gentler slope where the fishermen had lived for so many generations that the first settlers had long been forgotten.

Within the shadow of the encircling highlands, the fishing boats eased through calm water, black as the rocky heights above. They slid towards the wooden wharves of the Village, heading for their allotted places, furling their home-made sails as they went. Where a stream made its final downhill rush into the salty bay, bait shacks and boathouses stood half on land, half on wooden pilings driven into the rocky bottom. As they neared the shore, the men glanced up at their cottages of stone and weathered grey wood that looked over each other’s rooftops down to the water’s edge. Smoke from the chimneys rose almost straight up into the evening air, until it escaped the lee of the sheltering cliffs, briefly caught the last light, and was swept away by the wind. It was near nightfall in the Village when the fleet was secured and the crews went ashore. Orange light from oil lamps spilled into the darkness as doors opened to receive the sailors home.

Inshore, higher than the last semi-circle of dwellings, the stream chuckled over stones as it left the forest. There, high above the Village, within the sound of running water, was a level space where the Village cemetery grew a little larger every year to make room for the winter’s dead. Higher still, the rocky crest was a black line against the twilit sky. In the shadows, where gravestones outnumbered the people living in the Village below, there were more markers in the ground than there had been bodies carried up the hill. “Lost at sea” repeated like a melancholy chorus echoing down the years, each of which had seen the little boats sail out of the harbor onto the ocean, some never to return.

If the fate of most men of the Village was to follow the sea until it caught them, the role of women was equally circumscribed. Their lot was to become a sailor’s wife, and too often, his widow. Some would live to see their grandchildren, some would die bringing another sailor into the world — or a perhaps a woman destined to tend house and wait hopefully for her seafaring husband’s return.

However, the sea yielded fish and the forest grew wood for boats in which to take the catch, and for most of the Villagers, there was security and even some contentment in knowing their fate. They were untroubled by the rest of the world, which had long forgotten them. Daily life within the cycle of the seasons was enough: few wondered about what might be Away or what could have happened Before, since none of them knew the answers. Their lives were not easy, but because they depended on each other in times of hardship, they also shared the brief moments of joy.

Go to Audiobook, above to hear the whole Prologue, and all the rest of the book.

Tales of Rebels and of the Sea. Also, stories about Dragons.